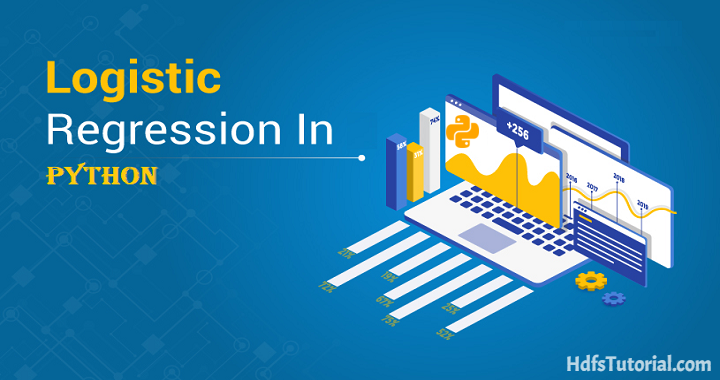 The real-time example can be-

If you may have noticed here, I have only included the example where the answer is either yes/no or true/false or 1/0. And yes, that is the requirement for logistic regression.

When we can use logistic regression

Even if it has two value but in the form of Yes/No or True/False, we should first convert that in 1/0 form and then start with creating logistic regression in python.

What is a logistic regression model

The logistic regression model is one of the simplest machine learning models which is used for classification. And that too only for two-class classification. If your response variable has more than 2 options like grading system (where we can more than 2 grades) then we can’t apply logistic regression. In such case, Random forest algorithm in python or decision tree algorithm in python is recommended.

Logistic regression in python is quite easy to implement and is a starting point for any binary classification problem. It helps to create the relationship between a binary categorical dependent variable with the independent variables.

In this logistic regression using Python tutorial, we are going to read the following-

As said above, logistic regression is majorly used for predicting the binary categorical variable. Means those response variables which has only 2 options. This can be used to identify whether the person is diabetic or not and similar cause.

If you are continuous or discrete data and looking to do prediction, you may apply linear regression or similar.

And if you have categorical data but more than two class, you may apply a decision tree or random forest algorithms.

So, we can say that logistic regression is a special case of a linear regression model where the response variable is binomial categorical.

Being said that, the predicted value for linear regression can be anything in the finite space. For example, let’s say we are working on a retail data to predict the profit. And so, the profit can be anything like- 100, 200, -150, 400, 345, etc.

And so, if we draw the graph for this, it can be somehow like this-

And so, if the output of the sigmoid function will be is more than 0.5, we can classify that to be 1 while if it is less than 0.5, it can be classified as 0.

And so, the graph for the output of the sigmoid function will be like-

But the error associated with 0.6 predictions will be way more than 0.9. And that is the reason we always aim for the sigmoid output either near to 0 or near to 1 so that error will be less. And so, depending on how the accuracy of the model you are getting, the graph can vary like below- 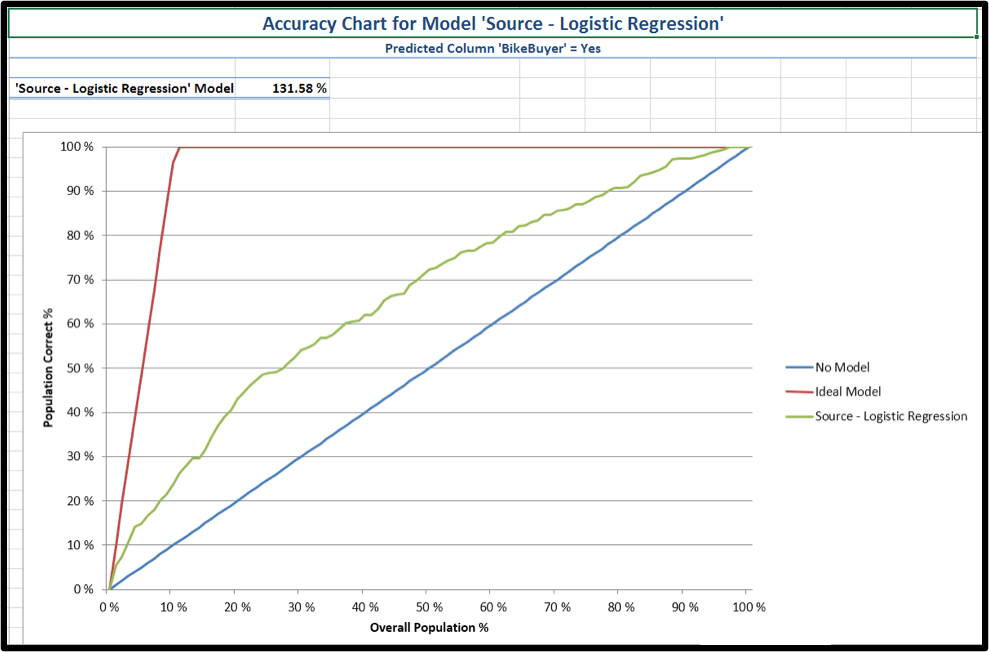 As we can see, the more sigmoid output we will receive near to 0 and 1, the better curve we can get (ideal is the red line). The area below the curve is called as AUC (area under the curve) and explain the explanation of the covered data. And this curve is called the ROC curve which is the performance measurement parameter for logistic regression in python. 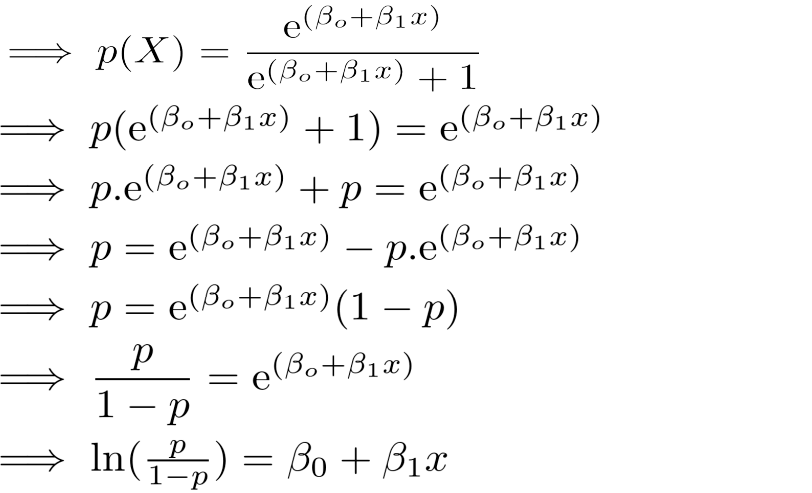 Here the right side is just the same equation for linear equation.

Now let’s start and see how to create logistic regression in python using a student dataset. The dataset can be downloaded from here and it has just three column-

I am going to do this in Jupyter notebook and you can do the same. If you are not aware of this, please install Anaconda where you will get Jupyter notebook including various tools. There are only the following steps in creating any machine learning model-

If looking for more free dataset, please check this post.

We may need the following libraries- Pandas, sklearn, numpy, matplotlib, and seaborn. Let’s initialize these libraries so that we can work smoothly.

Load the dataset and do an EDA

Once the dataset is loaded, quickly use the head() to check the first five records- 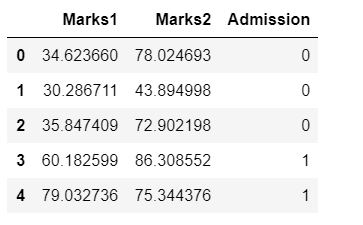 Also, check for the null records. We can quickly look for the info() function which initially can tell us about non-null values: 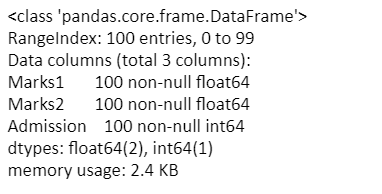 This says we have a data frame which has 100 records and 3 columns. None of these columns are having any null values. Marks1 and Marks2 are float and Admission are of Integer datatype.

So, we are good on the EDA side and can go further. 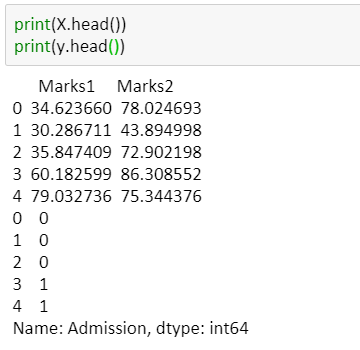 Split the dataset into test and train

We need basically two datasets one to develop the model and another to test our model for evaluating the performance.

We can use the function train_test_split() which is a part of sklearn library. This has majorly 4 argument-

Now as we have splitted the dataset into train and test and so let’s start creating the logistic regression model in python on the training dataset.

To do that, we need to import the Logistic Regression module from sklearn.linear_model. And then need to create the logistic regression in python using LogisticRegression() function.

Do the prediction on the testing dataset 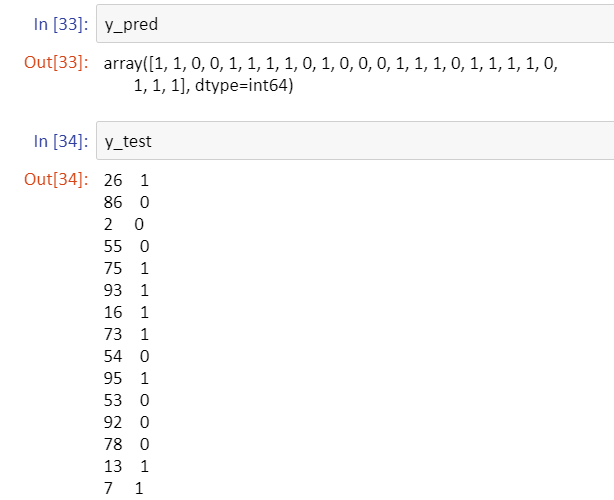 This is the predicted values for the 25% data we kept in our testing dataset. That means the first two students will get the admission while the next two won’t and so on.

As we can see, 1st four results are matching (just a coincidence 😊). While for the 5th student we have predicted that the student will get admission while originally the dataset says, that 5th student won’t get admission. And so, this is a misclassification which is ean rror. Similarly, we can check for other records.

Definitely, we won’t be doing this manually and so, we have confusion matrix here.

A confusion matrix is basically a two-way frequency table which is used to find the accuracy and error of the model. This tells about the number of correct and incorrect predictions for both 1 and o.

Now let’s create the same for our model-

AUC (area under the curve) and ROC (Receiver Operating Characteristic) curve are also being used to evaluate the performance of the logistic regression we just created. 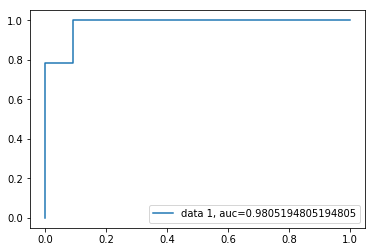 This is the logistic regression curve we have received which is basically the ROC curve. The AUC value is 0.98 which is really great. An AUC value of 1 means a perfect classifier and 0,5 means worthless. Means we can say an AUC value of 0.5 is just a random prediction.

That’s all about the logistic regression in python. Our model is correctly able to predict 88 records out of 100 records which are decent.

Advantages and disadvantages of logistic regression

Here is the complete code I have used in this post-

Do try and let us know if you face any issue or have any suggestion/questions.