Dataframe is a way in which we store our data. For example, let’s say you have a dataset in an excel or CSV file and you want to load that file in R. Then you can store that dataset in a dataframe and do all the operation. 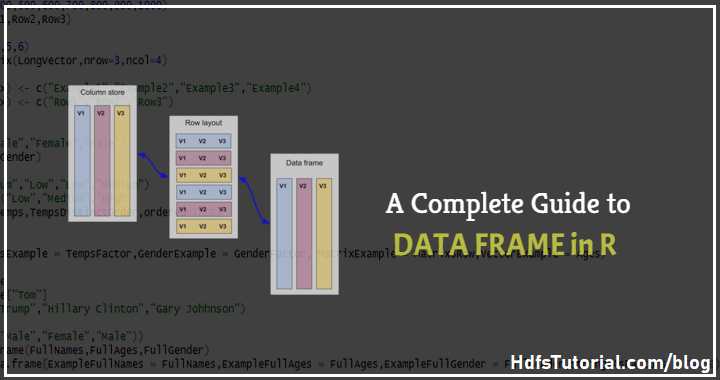 A dataframe is a list of vectors having the same length. When we say the same/equal length that means the number of elements should be the same in all the vectors. And so, we say a dataframe is also two-dimensional data structure in R.

The other way we can store the dataset are in- Vector, List, Matrix, and dataframe.

The major difference between matrix and dataframe is, the matrix can have only one datatype while dataframe can have a mixture of datatypes. For example, it can have numeric, character, factor, etc.

Here are some of the features of dataframe-

How to create dataframe in R?

Now as you know what is dataframe, let’s see how to create dataframe in R.

We can create dataframe in R by using the function data.farme()

df: It can be a matrix or a dataset that you have just loaded

Now let’s see how we can create data frame by list of vectors having same length.

Here I have provided the name of the columns as 1st col, 2nd col, and 3rd col respectively.

To check the structure of the dataframe, we can use str() function. For example-

This output says we have 3 records and 3 columns in the dataframe. Then it shows you the column names followed by the datatype of the columns and then few sample records of each column.

Check if a variable in dataframe or not?

If we want to check if the given variable or created variable is a dataframe or not, then we can use the class() function.

So, this says that “df” is a dataframe.

We can also check if “df” is a dataframe only or not then we can use is.data.frame() function. This results in TRUE/FALSE as output. If the variable will be a dataframe then the output will be true else false.

Here are some of the additional functions which you can use to check the number of rows and columns. Although the same can also be checked by the str() function. But individually you can also check by using ncol() and nrow() functions.

Now let’s see how we can access the elements (rows and columns) of a dataframe.

As we know the data are stored in the form of row:column format. And so, if we want to access the 1st row, we can access like below-

Here we have written df[1,] that means we are looking for 1st row and all other columns. Blank after comma means all columns.

Add a column to dataframe

For example, let’s add a new column named “4th col” to the existing dataframe df having an element (1,2,3)

You can check our detailed guide on add column to dataframe r.

Add a new row to dataframe

Delete a column from dataframe

We can also delete a column from a dataframe. For example, let’s delete the first column from the existing dataframe df like below-

So, simply, access the column which you want to be deleted and simply assign it to NULL.

We can also delete a row from a dataframe. For example, let’s delete the 4th row from the dataframe-

So, basically whichever column needs to be deleted, simply put a negative sign behind it and it will be deleted from the dataframe.

We can also delete a column like we deleted the row above. For example-

We can create a subset of dataframe from existing dataframe based on some condition.

For example, we are looking to select only those records where 4th col value should be more than 2.

How to update dataframe in R

For example, Let’s say we want to update the 1st row, 2nd column record (which is currently 1) to “HDFS” then we can do the following- 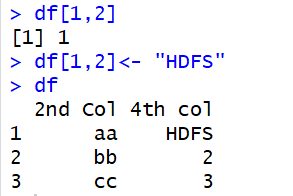 These were all about dataframe in R. In this tutorial, we discussed about the following-

Hope you followed the guide on dataframe in R and came this way. Here is the entire code which we have used in this dataframe in R. You can also download the file using the below link.

If you face any issue, please feel free to comment below. You can check more such R Tutorials here.